It has been said that influence is the foundation of leadership.  I was recently reminded of the essence of influence and how to create it as I watched some rather magical balloons float up to the heavens. 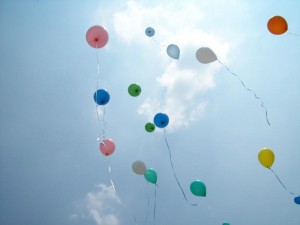 I was grabbing a bite to eat on the lovely terrace outside the Terrace Café at Shands Cancer Hospital here in Gainesville.  It would be an almost 13-hour day at Shands working on our Kids Kicking Cancer program, and it was nice to just take in the view of the sky, the clouds, the trees, and the Fountain of Hope, all of which were in clear view as I ate my dinner.
Suddenly, the view changed as I noticed two balloons floating up in front of me, only 20 feet away.  I’m not sure if they were released intentionally or by accident.  Maybe it was a bit of both.
They floated up rather quickly, but I noticed as they rotated in the breeze that both balloons read, “Get Well Soon!”
Almost as if the balloons were intending to do so, they headed over towards the windows of the patient’s rooms.  And, as if to further give the impression that these balloons were somehow magical, a couple times they seemed to pause for a second or so as they floated in front of a patient’s room.
I could only imagine how nice it must have felt for a person sitting in a hospital room to receive such a lovely gift – a magical balloon that seemed to be meant just for them, wishing that they be well.
This is a gift that we can give each person we meet, which just might also be one of the most important things we can do as leaders, whether we have a title or not.
Influence is the essence of leadership.  If we are unable to influence the behaviors of others, then we are not effective as a leader.  Some people still think fear is a good way to influence behaviors, but most of us know that it doesn’t work very well, and certainly isn’t sustainable.
A very effective way to build our influence is to show people that we truly care about them.  When people know that we are committed to their well-being and success, they are much more likely to follow us.
A wonderful and simple technique for building our capacity to care for and help others is to make a new mental habit.  As you approach an interaction with another person, you can simply ask silently in the mind, “How can I help this person to be happy?”
You don’t need to immediately have an answer.  You just need to ask the question.  A way to help them may present itself while you interact, after you interact, or not at all.  What’s most important is that you set the intention for the interaction as one of service.  People will pick up on this unconscious signal that you care about them.  You might find that when people talk about you they say, “I feel good when I’m around her.”
You definitely don’t need a title to attract people to you when they feel good in your presence.  I believe that this is the essence of truly great leadership.
What question are you asking in your mind when you approach another human being?
Image credit – http://worldwidewhether.wordpress.com/
Communication, Leadership, Matt's Insights, Personal Development, Servant Leadership, Success In Life